When I last visited Dubrovnik they had nearly finished restoring the beautiful old city from the devastation caused when it was under siege and attack during the Yugoslav Civil War. 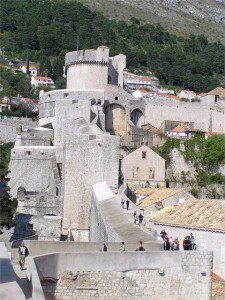 The beautiful setting of the traffic-free city with its encircling walls which can be walked round; the little harbour with the fortress towering over it; the dark narrow alleys stepping up the hills; the heavily wooded off-shore islands – these all combined in my mind to build an ideal setting for a spy story.

When you add to that the city under siege; the mix of races and religions mingling in the narrow streets; desire for independence; the threat of the powerful Serbs and Montenegrins to open fire on the isolated community – it all adds up to an exciting storyline.

That was the beginning of the inspiration which led me to write Dancing with Spies which will be published in e-book formats later this month or in early August.

3 thoughts on “Dubrovnik – City of Spies”